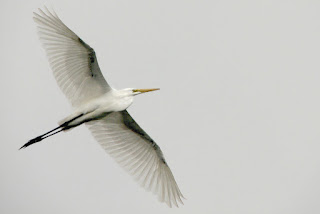 Tibetan teacher Chögyam Trungpa once opened a class by drawing a V on a large white sheet of poster paper. He then asked those present what he had drawn. Most responded that it was a bird. “No,” he told them. “It’s the sky with a bird flying through it.”

How we pay attention determines our experience. When we’re in doing or controlling mode, our attention narrows and we perceive objects in the foreground—the bird, a thought, a strong feeling. In these moments we don’t perceive the sky—the background of experience, the ocean of awareness. The good news is that through practice, we can intentionally incline our minds toward not controlling and toward an open attention.

My formal introduction to what is often called “open awareness” was through dzogchen—a Tibetan Buddhist practice. Until then, I’d trained in concentration and mindfulness, always focusing on an object (or changing objects) of attention. In dzogchen, as taught by my teacher Tsoknyi Rinpoche, we repeatedly let go of whatever our attention fixates on and turn toward the awareness that is attending. The invitation is to recognize the skylike quality of the mind—the empty, open, wakefulness of awareness—and be that.

My first retreat with Tsoknyi Rinpoche loosened my moorings in a wonderful way. The more I became familiar with the presence of awareness, the weaker the foothold was for the feelings and stories that sustained my sense of self. Tensions in my body and mind untangled themselves, and my heart responded tenderly to whoever or whatever came to mind. I left that retreat, and later dzogchen retreats, feeling quite spacious and free.

I more recently learned of the work of Les Fehmi, a psychologist and researcher who for decades has been clinically documenting the profound healing that arises from resting in open awareness. In the 1960s researchers began to correlate synchronous alpha brain waves with profound states of well-being, peace, and happiness.

Fehmi, an early and groundbreaking leader in this research, sought strategies that might deepen and amplify alpha waves. Experimenting with student volunteers, he tracked their EEG readings as they visualized peaceful landscapes, listened to music, watched colored lights, or inhaled various scents. But it was only after he posed the question, “Can you imagine the space between your eyes?” that their alpha wave levels truly soared. (NOTE: here is a link to a downloadable guided meditation that I've adapted from Fehmi's work, titled, "Inner Space: Gateway to Open Awareness" - http://www.tarabrach.com/audioarchives-guided-meditations.html.)

He posed another: “Can you imagine the space between your ears?” The subjects’ alpha waves spiked again. Further experimentation confirmed the effects of what Fehmi termed “open focused attention.” The key was inviting attention to space (or stillness or silence or timelessness) and shifting to a nonobjective focus.

Narrowly focused attention affects our entire body-mind. Whenever we fixate on making plans, on our next meal, on judgments, on a looming deadline, our narrowed focus produces faster (beta) waves in the brain. Our muscles tense, and the stress hormones cortisol and adrenaline are released.  While necessary for certain tasks, as an ongoing state this stress constellation keeps us from full health, openheartedness, and mental clarity.

In contrast, open-focused attention rests the brain. With a sustained pause from processing information—from memories, plans, thoughts about self—brain waves slow down into synchronous alpha. Our muscles relax, stress hormone levels are lowered, blood flow is redistributed. No longer in fight-or-flight reactivity, our body and mind become wakeful, sensitive, open, and at ease.

You may have noticed the effect of open awareness when looking at the night sky and sensing its immensity. Or during the silence in the early morning before sunrise. Or when the world is still after a snowfall. We resonate with such moments because they connect us with the most intimate sense of what we are. We sense the depth of our being in the night sky, the mystery of what we are in the silence, the stillness. In these moments of objectless awareness there’s a wordless homecoming, a realization of pure being.

In practicing open awareness, I’ve found it helpful to think of existence—the entire play of sounds and thoughts and bodies and trees—as the foreground of life, and awareness as the background. In the Zen tradition, the shift from focusing on the foreground of experience to resting in pure being is called “the backward step.” Whenever we step out of thought or emotional reactivity and remember the presence that’s here, we’re taking the backward step.

If we wake up out of a confining story of who we are and reconnect with our essential awareness, we’re taking the backward step. When our attention shifts from a narrow fixation on any object—sound, sensation, thought—and recognizes the awake space that holds everything, we’re taking the backward step. We come to this realization when there is nowhere else to step. No anything. We’ve relaxed back into the immensity and silence of awareness itself.

You might pause for a moment and receive this living world. Let your senses be awake and wide open, taking everything in evenly, allowing life to be just as it is. As you notice the changing sounds and sensations, also notice the undercurrent of awareness—be conscious of your own presence.

Allow the experience of life to continue to unfold in the foreground as you sense this alert inner stillness in the background. Then simply be this space of awareness, this wakeful openness. Can you sense how the experiences of this world continues to play through you, without in any way capturing or confining the inherent spaciousness of awareness? You are the sky with the bird flying through; you are, as a traditional Tibetan saying teaches:

Adapted from True Refuge (2013)
Enjoy this talk on Wise Investigation